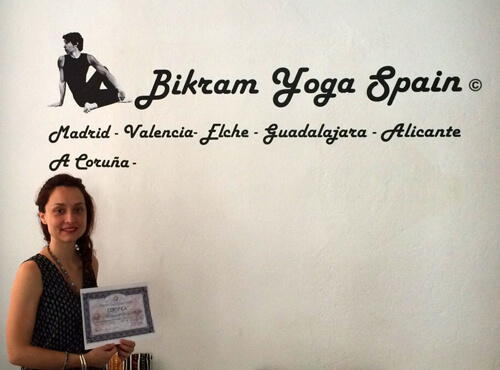 My mother practiced (and practices) Hatha yoga at home, so since childhood I saw and experienced this discipline. While studying in Madrid my career in 2002, I looked for a place to practice yoga and right next to my house, they opened the first center in Spain of the “unknown” Bikram Yoga . I confess that I chose it because of its closeness and because of the classic yoga postures I had practiced so much, but after a few sessions it became something more. It gave me strength, elasticity, confidence, determination and patience that I had not achieved before.

After leaving Madrid, I left the practice of Bikram yoga, remembering on occasion the benefits I experienced during my practice. After years of pilgrimage in which I continued to practice yoga, I returned to my city A Coruña to join the business world.

But I felt the need to convey what the path of yoga had done in my life. I became a Hatha Yoga teacher and I taught whenever I could. But I became insufficient again , I needed one more jump, I needed a discipline that enlarged the benefits of classical yoga, and that’s Bikram.

Bikram is the cherry I needed!

I looked for ways to train as a Bikram teacher and it was not easy if I wanted to stay in my country, until I found Jonathan and his great Bikram Yoga Spain Studio team. From that moment, I learned that everything is possible with effort and work. I got certified in Bikram Yoga in July 2015.
I also learned that pursuing a dream is difficult, fulfilling it even more, but the really impossible thing is to fulfill it without pursuing it. In this I am .