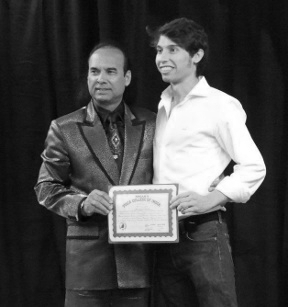 Bikram Choudhury . Born in Calcutta (India) in 1946, Bikram Choudhury began to learn Hatha Yoga at the age of four years under the orders of master Bishnu Gosh, younger brother of Paramahansa Yogananda (author of “The autobiography of a Yogi “). At age 13 he won his first national yoga championship, winning it consecutively for three more years.

After these triumphs and consecrating in the Yogi universe, at the age of 16 Bikram suffered a very serious knee injury during a weight lifting workout. Prestigious doctors told him that after this accident he could not walk again. Despite this, Bikram placed himself in the hands of his teacher, Bishnu Gosh, and after 6 months of hard work and rehabilitation, he managed to fully recover from his serious injury and walk again. From then on, Bishnu Gosh asked him to start founding Yoga schools all over India. His success was resounding, and after India, he founded two other schools in Japan.

In 1972 he opened his first school in the USA, specifically in San Francisco and in 1974 he established his official school “Bikram College of India” in Beverly Hills (California). Since then Bikram is dedicated to promoting the healing properties of his Yoga technique.

Numerous celebrities, actors, singers and athletes are recognized followers of their technique. There are currently more than 1,000 Bikram Yoga centers in the US and more than 2,000 around the world, and more importantly, thousands of people enjoy and benefit from this Bikram Yoga practice.